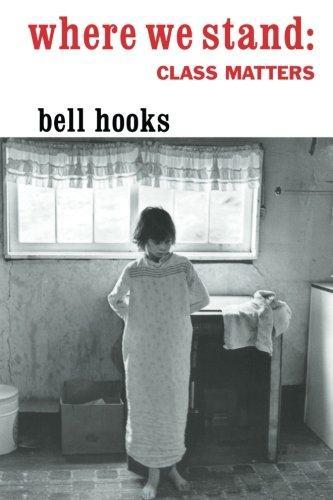 I've been reading Where We Stand: Class Matters by bell hooks for a few months. I'm at the end of it now, and I need to return it to the library tomorrow, so I wanted to record some quotes and notes so I won't forget. The reason I started to read was because I felt lost with my solidarity practices. An experience with a friend left me understanding the ways that my focus on racial solidarity was not taking into account the different class backgrounds we were coming from. I intended to read this book with another person from a higher class background than me, but I ended up just reading it on my own.

When it comes to class consciousness and solidarity, I felt like I was overextending myself in some areas yet was unaware of the all the ways I was still exercising my class privilege. I'm still searching for the ways that we can "maintain solidarity in the face of class difference" that hooks outlines so clearly below.

The following excerpt is from a chapter in the book called "Crossing Class Boundaries":

I found it difficult, though never impossible, to move back and forth among different classes. As I began to make more money and gain recognition as a feminist thinker and cultural critic, the money I earned became a source of conflict between me and members of my family and friends. Even though I had held different ideas from family and friends for years, when it came to making money, we were all struggling. By my mid-thirties, I was no longer struggling and my income was growing. The fact that I was single and had no children made it easier for me to pay debts and live cheaply in ways that family and friends could not. While I wanted to share economic resources with them, I also wanted to share knowledge, to share information about how we might all change our lives for the better.

The more money I made, the more needy individuals came seeking financial help. Difficulties began to arise when frustrations about having their material needs met and my response to those frustrations prevented us from attending to the overall emotional needs of any positive relationship. And it was evident that the politics of shame around being needy made it impossible for some individuals to not feel "looked down" upon for desiring assistance even if they were not actually being looked down upon.

Money is so often used as a way to coercively assert power over others that it can easily become an arena of conflict, setting up hierarchies that were not previously present. Like many folks in my position, I often confront needy individuals who see my willingness to share as a weakness and who become exploitative. And there are times when I am scammed and misued (for example, a student says that they need money to finish school–you give the money–and they drop out, pocketing the refund, etc.). Any effort to not ally oneself with the existing structure of class elitism, to share resources, will necessarily meet with conflicts and casualties because many underprivileged folks share the predatory capitalist values often associated solely with the affluent. Often consciousness-raising has to take place with those who lack material privilege so that old models of guilt-tripping and exploiting progressive individuals who are working to live differently are not deployed.

All too often the affluent want to share using the old models of philanthropy and patronage that support giving while protecting one's class interest. This kind of giving rarely intervenes on or challenges the structures of economic class exploitation. Concurrently, affluent individuals who care about those who suffer the brunt of an unjust economic system often lose heart if their efforts to share are misused. This response can be an act of sabotage and self-indulgence. Politically astute individuals with class privilege have to remain aware that we are working with inadequate models for communalism and social change so that there will necessarily be occasions when the best efforts fail to get the desired outcome.

When I have experienced a breakdown of communication and misuse, I use it as an occasion to invent methods of intervention that will work. When sharing resources does not work, it would be simple to refuse to identify with the class-based suffering of those in need and assume a protective stance that would indicate allegiance to privileged-class interests. However, I remain committed to an anti—class elitism vision of solidarity that sees working things out and processing issues in such a way that bonds across class are strengthened as part of resistance struggle. This has not been a straightforward or an easy task. There is little theoretical or practical work written about how we must behave and what we must do to maintain solidarity in the face of class difference.